Jake Sizemore is a professional singer, songwriter, guitarist and artist who performs original and cover music as a solo performer and band member in the DC Metro region.

At age 3, Jake’s parents realized he only expressed interest in toys that were musical in nature. They bought him a toy keyboard and one day heard “Twinkle Twinkle Little Star”. Assuming it was preprogrammed on the toy, Rachna didn’t think much of it at first but soon after realized Jake was playing nursery rhymes he had heard on TV and other toy instruments. It became apparent Jake was musically-gifted and capable of teaching himself to play. As a result, his parents bought him a real keyboard and within weeks he was playing songs by the Snow Patrol.

Since then, Jake has continued to perfect his artistry and has performed at countless venues throughout the DC Metro. He’s played at numerous high-profile events, including the National Education Association’s 50th Anniversary Symposium; the DC Walk Now for Autism on the National Mall in front of thousands of people; and at a semi-professional football game where he sang the National Anthem. Jake’s latest achievement is for his talent applying his musicianship on stage, as he has received a nomination for a 2022 Cappie in the Creativity category for his work with the band for Lake Braddock’s The Heidi Chronicles.

When Jake was 8 years old, he was visiting with a friend who had a guitar. Jake picked up the guitar and didn’t want to put it down. He was instantly obsessed. The friend generously gave Jake her guitar and again, he taught himself to play by watching concerts by John Mayer. Not long after he picked up the bass and drums, on his way to becoming a one-man-band.

Jake performed live for the first time at age 11 in front of 200 people at the Autism Society of Northern Virginia’s Arts for Autism Gala.

In 2015, Jake auditioned on Broadway for “School of Rock The Musical” in front of Andrew Lloyd Webber. He went on to complete a tour of California, playing gigs from San Diego to San Francisco with his School of Rock Vienna House Band.

In 2015, Jake was Fairfax County Public School’s first-ever National winner of the Council for Exceptional Children’s “Yes I Can Award” and his original song, “Things I Like” won an Award of Excellence in the National PTA Reflections Contest. In 2017, Jake’s second original song, “My Guitar, My Story” won Outstanding Interpretation at the Virginia State PTA Reflections contest and he was a semi-finalist in the 2017 Vienna Idol competition. Jake was selected to participate in the Music at Mosaic summer concert series and performed at the Fillmore with the regional cover band “The Great American Time Machine”.  In 2019, Jake was awarded a Dean’s Award from Berklee College of Music after participating in a summer Vocals Summit.

At Lake Braddock Secondary School, Jake has been a member of the Advanced Guitar ensemble and the men’s chorus since middle school. He was the sixth middle school student in 20 years to be selected to perform at his school’s Unplugged Show.

In July 2020, Jake was deemed Citizen of the Month by the Braddock School District Supervisor for holding regular fundraising musical performances to benefit struggling local Virginia businesses during the Coronavirus pandemic.

Jake has incredible talent, perfect pitch, an astounding memory and ear for music, and outstanding stage presence. Regularly performing at the charity, political and community events; wineries; theaters; and private parties, Jake plays rock and pop covers that span the decades and get everyone singing and dancing along!

In the fall Jake will be heading off to Berklee College of Music to study Guitar and Voice. 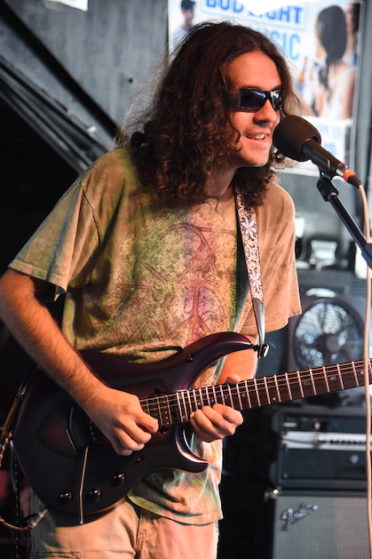